Our First Trip Out 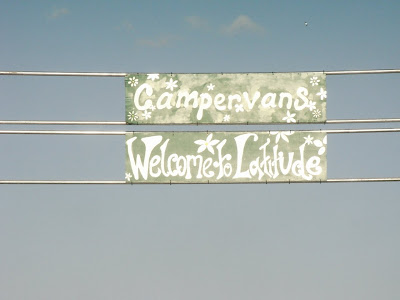 Link to some of our photos of the festival
This was the whole purpose of the MH project to start with, having had loads of friends that went last year.

I am please to say that first SWIMBO was very pleased with everything, so we were already on to a winner. Everything worked perfectly. Initially the fridge wouldn't light but after about 1/2 hour it went 1st time. The same thing happened when we got home, so I wonder if this is some sort of safety feature? 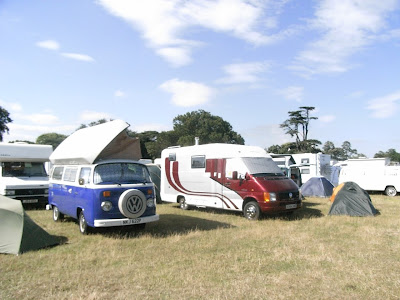 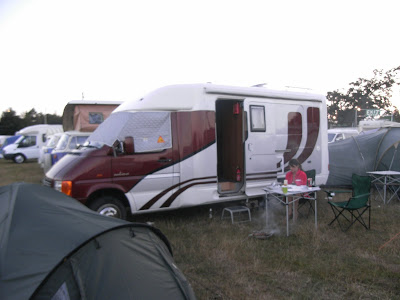 In fact the fridge was the source of most concern, not least because it needs to chill the beer! The 12v fridge switch which got damaged is illuminated, however I was loathed to pay about £20 for an illuminated 12v switch when an unilluminated one is only £1.59 So the first night who left the fridge on 12v (no warning light) as well as the now lighted gas? Who had no leisure battery in the morning? Anyway once management of the fridge was sorted it worked very well. Again if you read some recent posts you will see I was not happy that the fridge was working properly. It is. I think where I park at home there's not enough air flow as its near a thick hedge.

After the depleted battery situation 1/2 hour of running the engine restored their strength so a shower was possible. This exceeded expectations. The ceramic bowled toilet is so much better than the plastic one we have on the narrowboat. Worth the bit extra without a doubt. The bed was brilliant too. Never had memory foam mattress before but have to say is very nice indeed.

On the trip of about 65 miles each way Ambience travels nicely at 60-65 but will reach an uncomfortable 80, possibly more but seemed no point in testing that further.

I wasn't sure how it would handle with full water tanks as they are at the very back and hold about 150 liters. On the way out they were filled, on the way back pretty much empty only once having to top up once with 40L and giving the tent dwellers next door about 20L of hot water for their not so good solar shower. I can't say there was any noticeable difference in handling or performance.

The first night was very gusty so in the middle of the night and I guess in my sleep was able to stow the Caravanstore awning. I remember getting up to do it, but not actually doing it. Not sure how that's possible?
It was mentioned by a fellow ambulance owner that it was very quiet to travel with the cab windows open. He's not wrong. In fact it is quiet pleasant, not a lot of wind noise at all, and a nice breeze even with both windows fully down.

So all in all a very successful maiden trip. The only modification on the list is an external gas point for a BBQ as the disposable jobbie I bought was crap.
As well as the usual crop of factory built MH's there were a few interesting others. 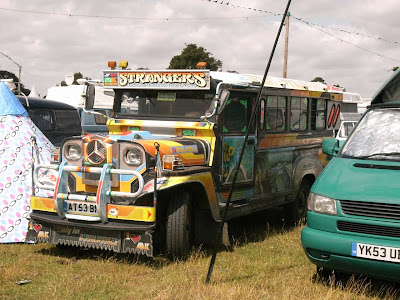 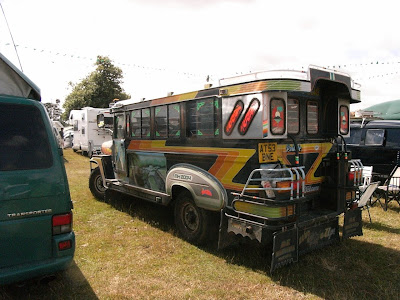 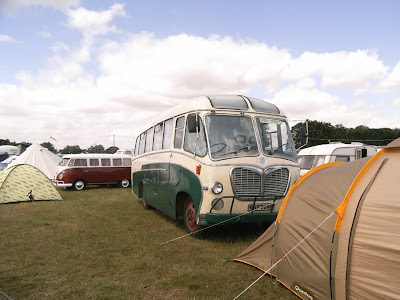 This one rather took my fancy. 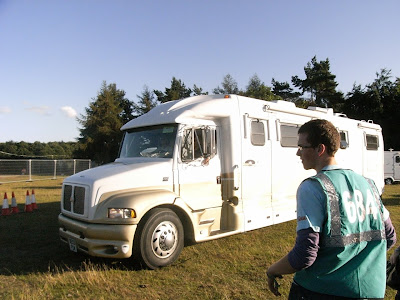 Not sure what make it was but it was RHD and sounded fantastic
And finally this. 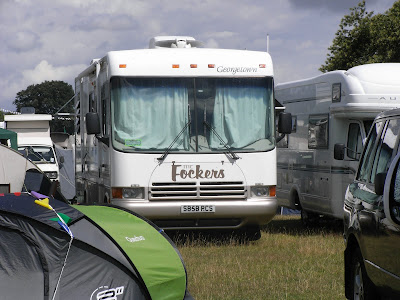 I finished the ambulance to motorhome conversion today.  The last job was to give it its name.
So  please welcome........... ambiance. 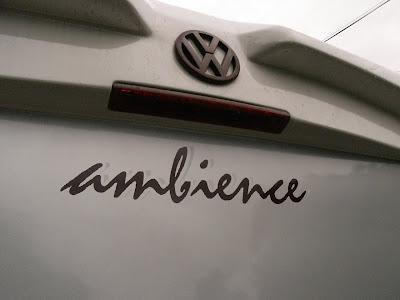 The colours have not reproduced well.  Its the same metallic
red with white shadow on silver 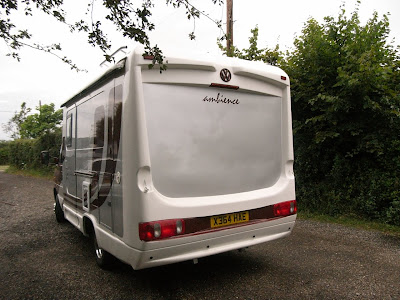 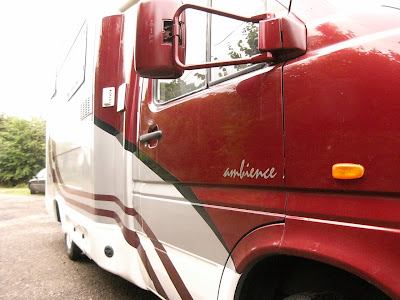 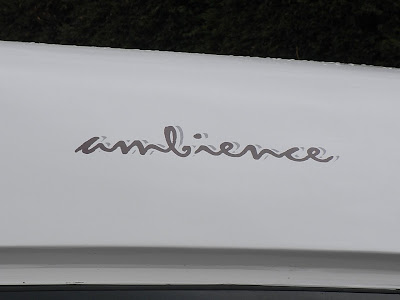 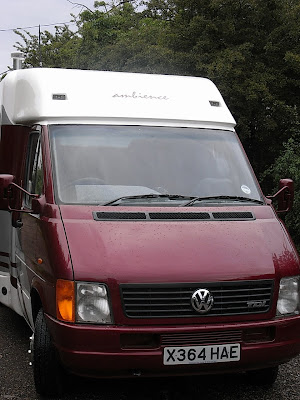 Tomorrow we are off to the Latitude Festival.  This was the initial reason to have a MH and so the conversion project.
There are still a few tiny finishing off jobs to do, and one major, which is to make and fit a towbar.  I would have done this already had the welder not been in the boat project and needing a mini digger to lift it out. Far to much bother as it is still needed in the boat.
Work on the boat is now "full on" so please follow my blog on that if you have time.
Posted by Kev's Blog Space at 23:34 3 comments:

How Many Odds & Ends Are There To Do?

I have steadily been working my way through a list of odds that need finishing and seemingly it grows as at the same rate.
At the beginning of the week I used the old rear door handles and recycled them in to some roof bars. 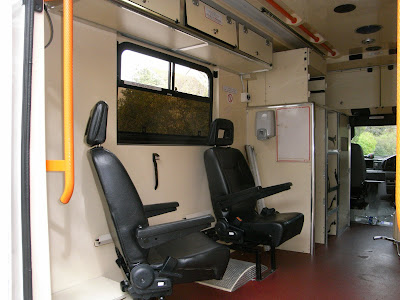 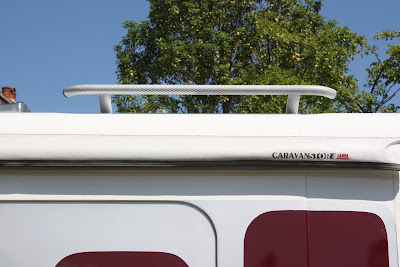 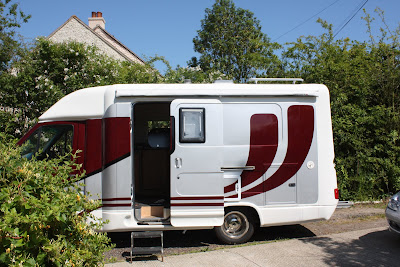 Not really a lot of practical use but adds a bit of styling.
I have also wired up the inverter, changed the GU4 20w Halogens for LED equivalent rated at 1w so a big power saving there.  This made a huge difference to 12v power usage on our narrowboat.

I got the A/C system recharged this week.  WHAT A DIFFERENCE!  its like a coldroom after about 20 minutes using the front and rear units.  £35 well spent.
With the help of a forum member I was able to get a door handle for the inside of the sliding door.  For some reason mine was never fitted with one, but also my side door was unusable as there were equipment racks in the way. I was also able to finish the upholstering the side door. 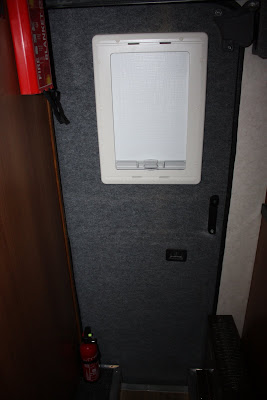 I have fitted the CO alarm, the smoke alarm, fire blanket, and fire extinguisher, re-trimmed the carpet edging around the step as I wasn't happy with the  way the carpet fitter did it.
I have also been forced to put some fridge vents in.  I was really hoping not to have to do this as I think the vents are ugly, but hey ho, I want cold beer more!  It has improved the fridge cooling considerably.  Of course just as every time I have cut a hole through the body there was another lump of hard SS plate to remove.
I had a play with putting a sub speaker in but that didn't work out.  I am going to have to find out more about this.  I have finished fitting the 240v power supply for the TV and satellite receiver.  I am determined NOT to have a TV, but I have put the necessary in just in case as I was doing the rest of the wiring.
I have put in a dedicated power supply back to the battery for the cigar multi socket and rewired the radio to run without the ignition key in, again a dedicated supply back to the battery.  These were left over form the ambulance wiring so made sense to use then.
Posted by Kev's Blog Space at 22:29 No comments:

A Bit Of Tidying Up Down Below

I have tidied up the garage are under the bed, a bit of ali trim and some skirting makes all the difference. 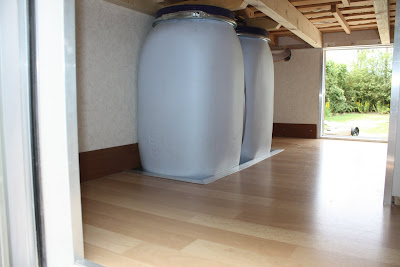 I took her out today with the water tanks full.  About 150L.  I was concerned it might affect the handling, but no, makes no noticeable difference.  I was concerned as is a fair bit of water sloshing about right at the back of the vehicle.  I suppose that where air suspension come in to its own.
Posted by Kev's Blog Space at 23:33 No comments: