Since the last blog I have been stripping out yet more wire.......... Yeh its still coming out!  Much of this was to do with the Eberspacher heater. and the rest of it was the ends from the large control panel shown earlier and wiring under the seats.  I think this is pretty much it, but never say never.

When I got my ambulance it had the front sign missing.  It was there on the auction picture, but when I got home it was missing.  I can only assume it was ripped off on the way home. We'll never know.

Initiall I thought I could make a replacement one with some steel sheet. I got bit cut and tried to fit it.  Oh no! what can't be seen initially is the way it fits.  The flat sheet won't work as its a compound curve, a bit like trying to make an orange skin being made flat, but in reverse.  Can't be done!

I had to bight the bullet and get the one from UVG.  The reason its in Welsh...... the Welsh ones are cheaper and its going to be sprayed anyway. That said still not cheap for a bit of formed plastic.  So warning if you have a UVG Prima body don't break the front!! its a sod to get to and to get the old adhesive of.  In total to replace this took the best part of 2 hours. 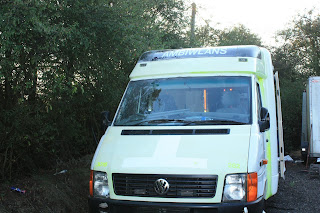 The other thing I have been doing is deciding how I am going to set it out inside and researching  equipment.  This is taking ages as one idea leads to another and then an evening has gone. I am not sure if I am going down the doner caravan route at the moment.  More on that when I decide.